Is Brian Pallister the biggest slumlord in Manitoba? 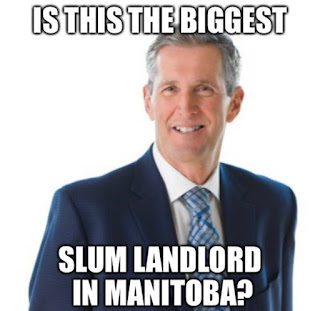 Yeah, it’s sort of a bold statement. But let me tell you a fun fact that I’ve learned living across from Manitoba Housing for the last 13 years: city by-laws don’t apply to them because they’re considered Provincial property.

But what does that really mean? Well, for starters it means when the tenants don’t mow the lawn (I’m across from the townhouse style units, and on a corner so it includes a large section of boulevard) you can’t call the city to complain about it. Well, I mean, you can call, but what you’ll learn is there’s nothing they can do to force them to mow the lawn. Or pick up garbage that’s strewn everywhere. And when you call MB Housing about it, nothing gets done.

Speaking of nothing getting done about things, it literally took over two years to get the tenants evicted from one of those units. This, despite repeated calls from the people on the other half of the duplex and from the MB Housing duplex next door and many other neighbours including myself. The last tenants were *blatantly* selling drugs out of the house, were running a bicycle chop shop and about 11 people were staying there on daily basis even though it was meant to be just one woman and her daughter (who, thankfully I think had been apprehended by CFS).

So after two years of constant complaints, they were finally evicted and the Province boarded up that side. That was last summer, June or July I believe. Now, part of me thought about writing a post prior to this complaining that there are likely hundreds of people on a wait list for housing, and this property sits empty.
Although, after years and years of a rotating cast of terrible tenants there is finally peace and quiet in ythe other three units and it’s a true gamble if new tenants will be any good, so empty means quiet.

Or so I thought.

The other day I thought I noticed a sliver of light above the board on the front window, but I thought it might just be my brain playing tricks on me. Well, tonight confirmed it - an upstairs bedroom has a light on. Which, I wouldn’t know if MB Housing was forced to board their properties to the same standards as other property owners under the Boarded and Vacant by-laws (boarding permit must be taken out at I believe a cost of $1000, all windows and doors must be boarded AND painted and if not rectified after a year the cost of the boarding permit for the next year doubles, and property must be inspected before being reoccupied). I’ll begrudgingly admit that in this particular case it’s a bit of a silver lining.

So now there are squatters. When I called MB Housing Security, whom I programmed in my phone years ago, I learned that this this isn’t the first time that people have broken in. Bets on if the house is littered with needles? Seems like a suckers bet.

I also was speaking with another neighbour from down the block earlier today (hallelujah it’s spring! We’re all getting out of our houses again!) who also lives in a MB Housing duplex. The other half of her unit is also vacant and has been broken into several times; she has 3 children and lives in constant fear of what’s happening on the other side of her walls.

Private landlords would never be allowed to get away with this (assuming the neighbours chose to be proactive). Why is it acceptable for the Province to do it?? I KNOW the problem is far more widespread than what is happening on my block.

I invite Mr. Pallister to come on down this July and see the two foot tall grass* on the boulevard, with all sorts of garbage and needles hiding in there. If he’s lucky, maybe he can meet some squatters too!

*The grass probably won’t be two feet tall. Why? Because every year, even after I vow that I’m not going to cut the grass, I break down and do it, because otherwise I have to look at it. I’ve asked the tenants in the unit to at the very least please clean the garbage from the boulevard so that I don’t have to do it/damage my lawnmower, but they don’t do a great job of it. It’s technically their responsibility to maintain the yard when they live in that style of housing - I’ve never minded helping out as I know that most folks probably can’t afford a lawnmower and their only option for storing it would be in their basement. All I ask in return is for the garbage to be picked up. But if they know they can run a crack den and bicycle theft ring out of their place without repercussions it seems unlikely they’ll face much grief from MB Housing for not keeping up with yard maintenance.

If any media would like to expand on this story I’m happy to provide you with the address, just send me a message through twitter @lovemelovemywpg