That's right, I am a dreadful blogger as of late. I have a head full of posts however getting them here is my downfall. However, I would be remiss to not mention the annual Wild Blueberry Pancake Breakfast being held next week (Friday November 22, 2013) at the Indian and Metis Family Centre (soon to be renamed the Indigenous Family Centre I believe) on Robinson at Dufferin from 7-10am. 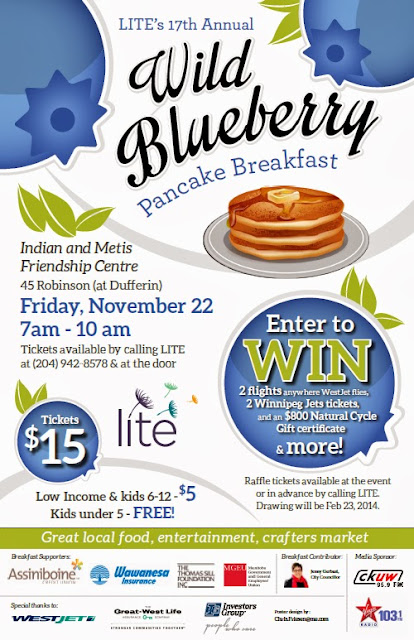 This is always a great event, and I enjoy the focus they always have placed on being environmentally responsible with a big focus on composting and recycling. I dare say it is one of the best events I attend annually (and maybe one day I'll win one of those great prizes!)

Here is a schedule of events:

And the performer bios:

Alexander McCowan:  Alexander McCowan is a singer/songwriter from Winnipeg, MB. Musically, Alexander borrows from numerous genres to achieve an over-all deep, laid back, country/folk groove which he has brought to audiences across Canada.  His current album “Present Times” was released in 2012 and is now available for purchase.
Dustin Harder: Dustin Harder is a singer/songwriter from Winnipeg, MB. Best known for his work with The Dusty Roads Band, Dustin has performed on several stages across Canada and built a following through grassroots promotion and hard work ethic. In 2009, Dustin released his album, “Searching for a River” that went on to sell over 1700 copies independently and was nominated for a 2009 Aboriginal People’s Choice Music Award.
Al Simmons: Al is a man dedicated to the all but lost art of combining comedy with song, dance, magic, and sight-gags. The end result is a one-man multi-prop, music-filled, off the wall variety show which has elevated audiences world-wide to collective giggles and all-out guffaws.
The Norman Chief Memorial Dancers: The Norman Chief Memorial Dancers were founded in 2004 in memory of the late Norman Chief, a Metis musician, singer, and entertainer. The Norman Chief Dancers’ primary purpose is to promote and develop community spirit through traditional style Metis music and dance. The team dances at fundraising events in Aboriginal communities throughout Manitoba to further promote Metis culture and heritage.
The Treble: Since 2010, The Treble has carved out a reputation for crafting impressively bold and unique folk-infused pop music that has enough of the integral rock vibe to appeal to a phenomenal cross-section of music lovers. The band’s recently released second EP “Northern Lights” is now their main focus as they criss-cross the country, charming music lovers from coast to coast.

Hope to see you there!

Posted by Winnipeg Girl at 4:12 PM