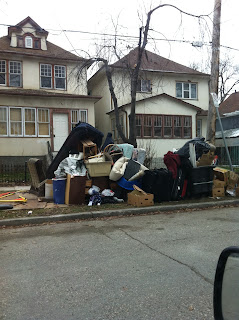 So Sammy is trying to make it look like he wants to do something about the arson problem in this city. That's cute. I say trying because although part of the problem is that there is only pickup once a week, it is certainly not the whole problem, or even the biggest.

According to this article in the Metro residents will still have to report the garbage under this "new" system. See, that's the biggest part of the problem - it's purely a complaint driven system.Call it a hunch, but I don't think the people doing the dumping are going to call it in, and if they happen to live in a cluster of other like minded people then it could take quite a while before it gets called in. The problem as well is these piles grow quickly once they get established. What starts out as a mattress and a chair quickly turns into giant piles. 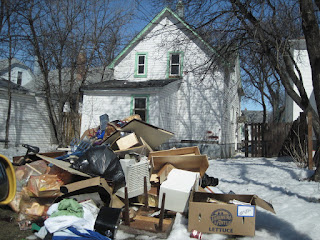 Now, most of the North/West End is not filled with people who don't care about their community, quite the opposite in fact. There is always talk from suburbanites who don't quite "get it" that it's not a simple matter of charging the house where the garbage is. Often, garbage ends up behind neat and tidy houses with caring owners, that's why it's called DUMPING. Is it really fair to charge the homeowner when they didn't do it? By that logic, suburbanites beware, there will no longer be such a thing as a hit and run or vandalism claim for your car - I mean, honestly, you shouldn't have had your car parked where someone could harm it.

So, for any of my readers who aren't lucky enough to know the ins and outs of the system, let me break it down for you.

Thank you for contacting Winnipeg 311.  Due to a new process set up by the City we would need you to clarify if the items included are in the lane or on private property before we would be able to a request to have these items removed.

Once we have this information we can forward these issues to the correct department. 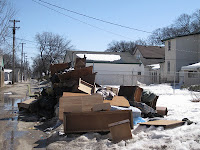 I bet you think I'm exaggerating. I wish I was.

So, sure, adding another pick up day will help a little, but if they want real change this is what needs to happen:
Saying that an extra pick up day will be added is merely putting a band-aid on something that needs stitches. As well, if the by-law folk were actively spending time looking for the garbage they might also be more likely to catch people in the act. I won't even bother to get into how ridiculous the process of getting people fined for that is - lets just say hopefully you have a smartphone set permanently on video and you get close enough to videotape clear pictures of people/license plates/and the garbage they dump - all without getting your face bashed in.

*Cheque day for those who are fortunate enough not to experience it, is the day when various government cheques come out (welfare, child tax, etc) and some (and I'm certainly not saying ALL, because lots of people have just fallen on hard times but are good people) of those recipients choose to spend that money on drugs/alcohol instead of using it for its intended purpose. This means that people who are clearly a bad judge of things are out and about making bad decisions because they are heavily under the influence. It's sort of like how even some people with jobs who get their paycheck on a Friday and blow it all by Sunday morning and spend the next two weeks bumming cash and smokes from you; except that instead of it being your one friend with bad judgement, it's him, all of his friends and some of their friends and they are more predisposed to lighting things on fire and stabbing each other. It's really fun, you should come see sometime. <--- i="">sarcasm font required.

Email ThisBlogThis!Share to TwitterShare to FacebookShare to Pinterest
Labels: garbage